Yves Christian was commissioned by Monsieur Louis Joullie through Glasgow based naval architects WG McBryde. She was built at Chantier Sibiril in Carentec, Northern France.

We haven’t been able to find out much about WG McBryde, other than he designed both commercial and pleasure boats from the 1920’2 through to the 1950’s. He published a book in 1947 called Twenty Designs of Motor and Sailing Yachts. Of the designs I have seen in excerpts of the book, some sailing boats look very similar to Yves.

The Sibiril yard that built her has a whole history of its own, being involved in making boats to smuggle out resistance fighters and downed airmen across the channel to Britain in WWII. The yard now makes modern pilot, rescue and commercial boats.

Here are the pictures of the build and launch of Yves. 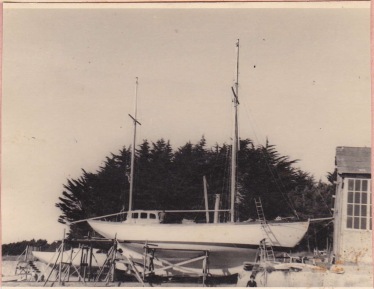 Here is a photograph of Yves taken by Beken of Cowes.

Yves was sold by M Joullie in 1955 to M Sidem after he commissioned Yves Christian II, an 85 foot yacht, again designed by McBryde.