Yesterday, I arrived early at No1 Slipway and we launched Yves and took her to another yard to put her masts in. Then we motored to a mooring on the river to try and make sense of the chaos on board and put poor Yves back together again.

Here in pictures and a few words are the things I saw, things I will never forget.

Yves waiting up the slipway at 7am.

A Frigate leaving the naval dockyard on exercises. It came right past the yard like a floating block of dangerous flats. 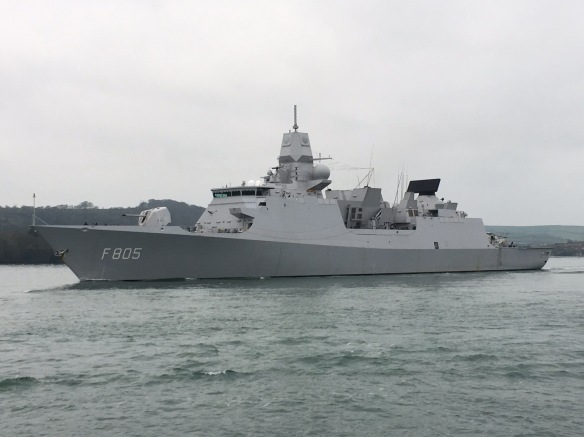 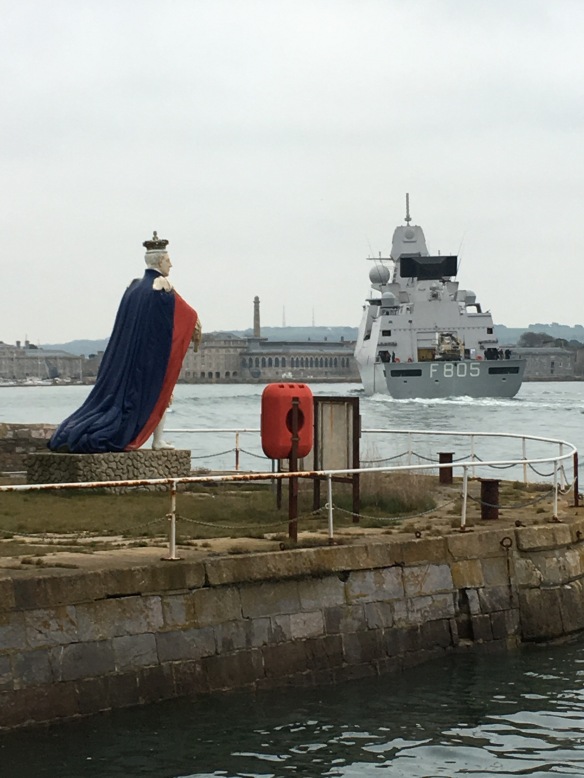 An exciting climb to get on board Yves in the yard. A real experience not tainted by the bane of enjoyment, health and safety. Wonderful… 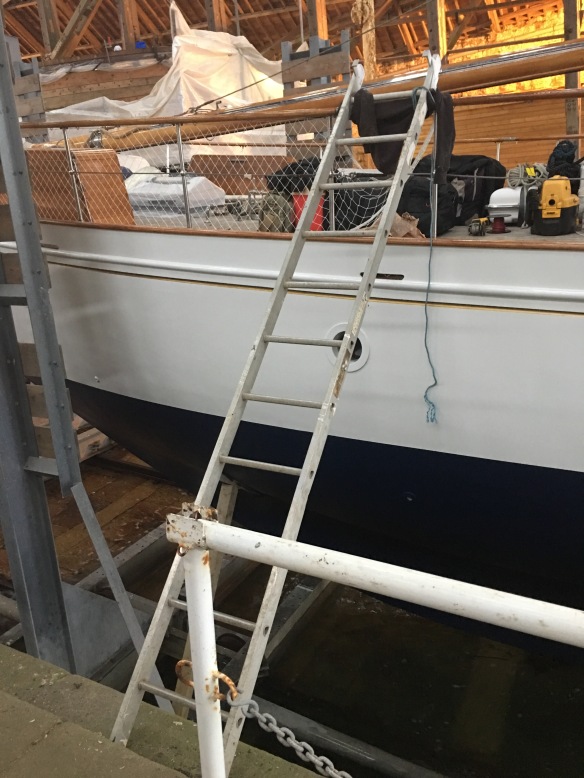 As we started to slide down the slipway, another Frigate glides by, outbound on naval exercises, more stealth bomber than ship. 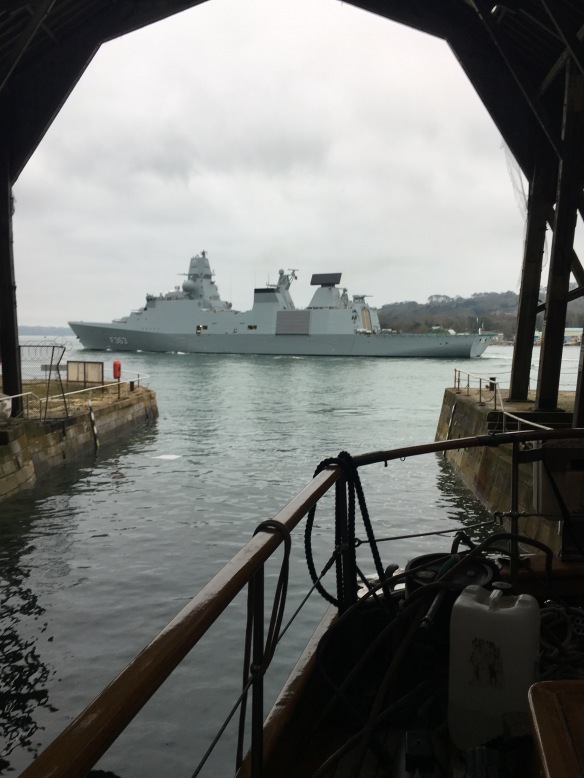 Work and chaos. AK and George in the photo developing the most expensive outboard bracket known to man. If I ever sell this boat (and I hope I never will) I want to be buried with this outboard bracket… 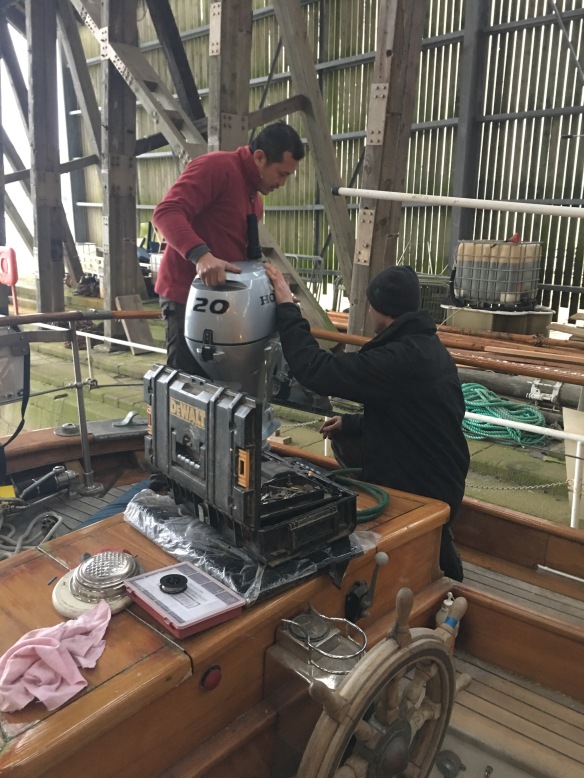 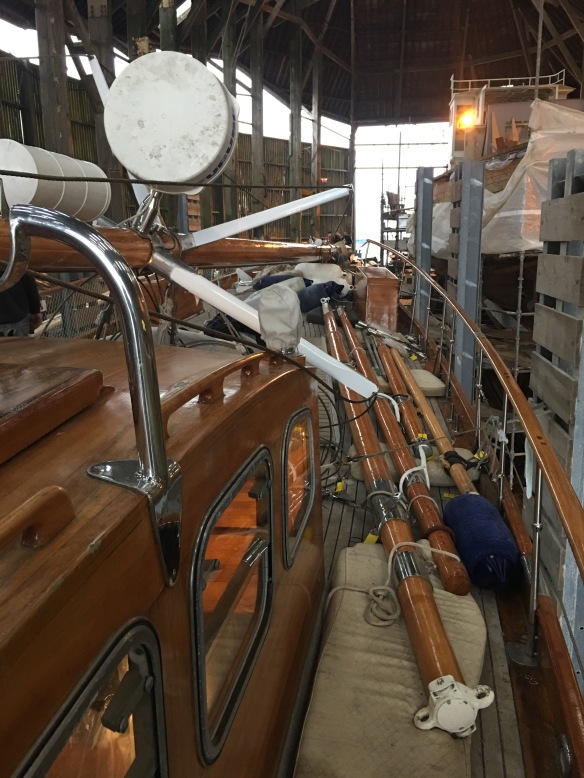 At Mashfords yard to step the main and mizzen masts. In no particular order:

The main goes in on the crane. 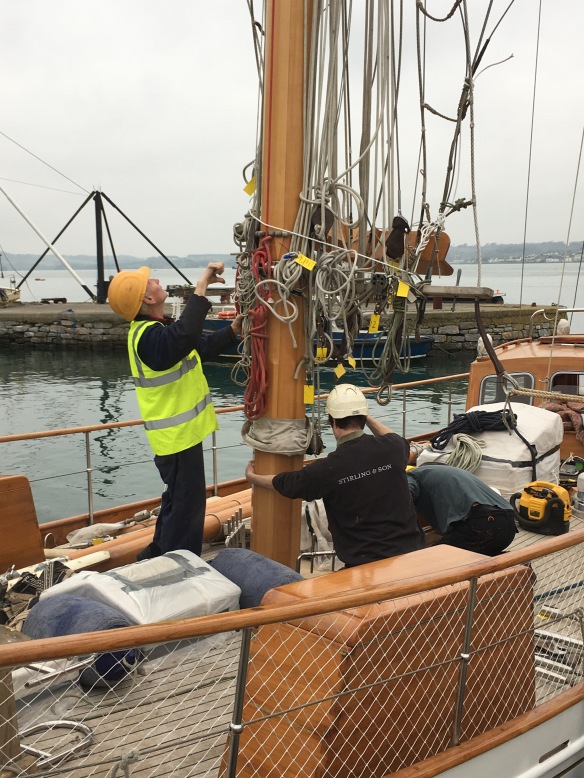 Rigger Mortis with Will and George. Rigger (I don’t know his name, just his nickname) is a man who knows his business… 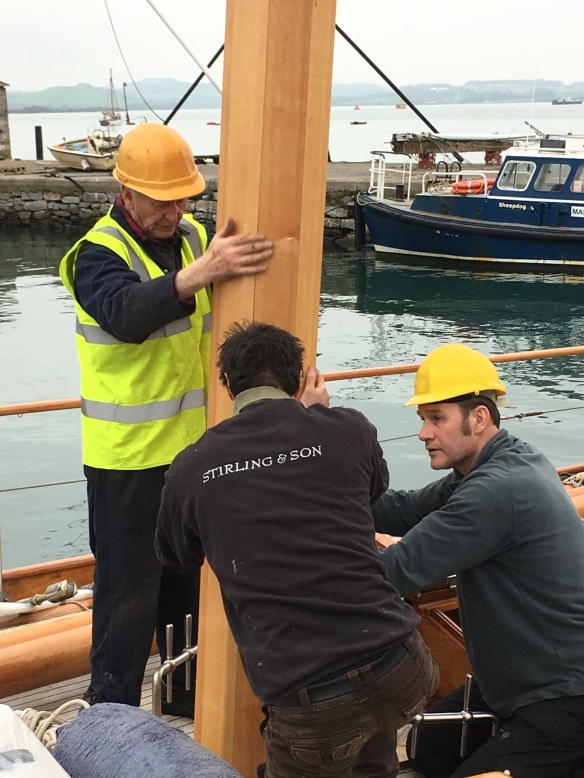 The crane lowers the main in. 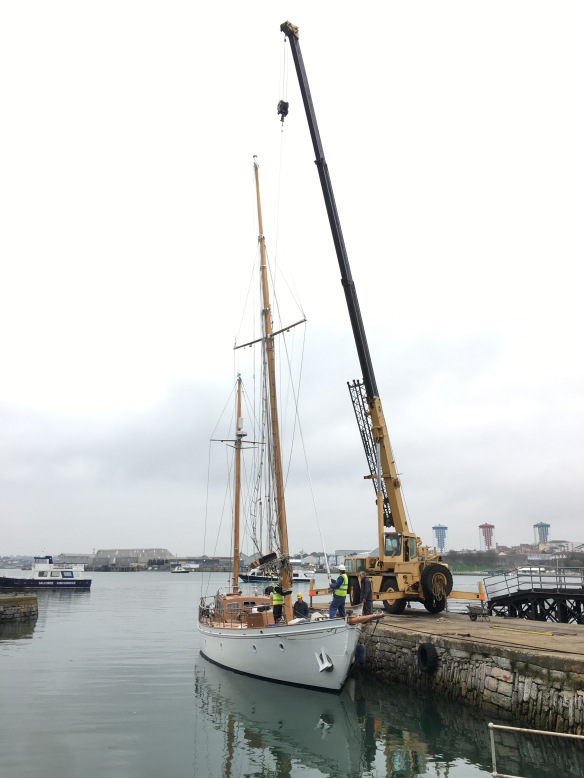 The Lynher, an old Plymouth barge that a man dug out of the mud many years ago. Now being passionately restored by new owners. I met Dominic Bridgman at Mashfords, one of the owners, another passionate and committed custodian of this amazing piece of Plymouth’s history. See their website on http://tamarbarge.org.uk/ 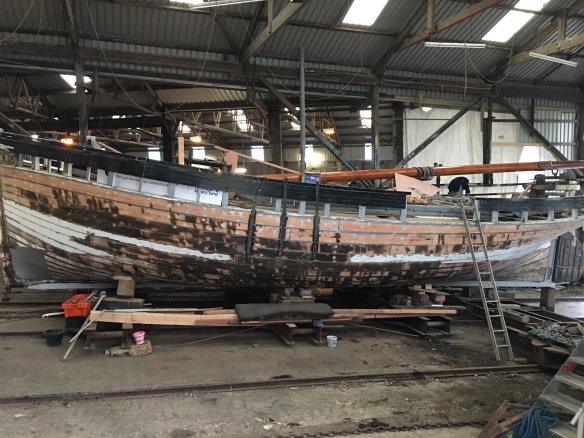 Arrival at Mashfords, the main mast lying on the quayside ready. 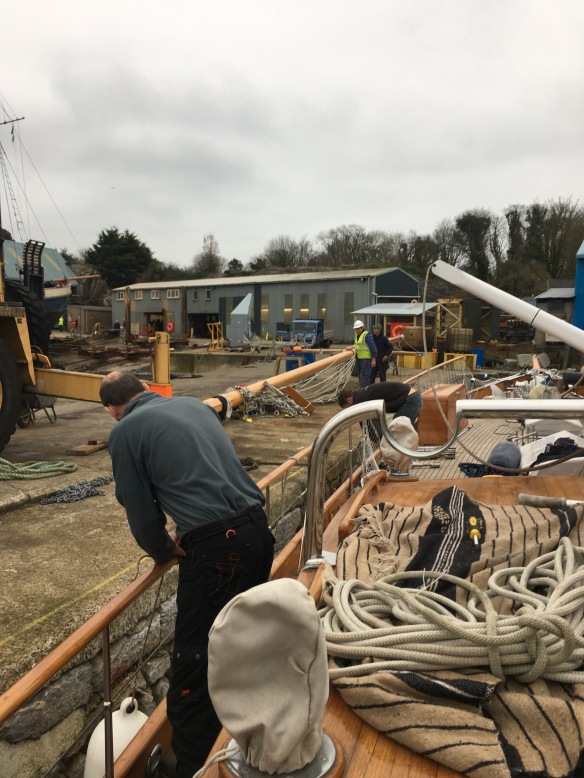 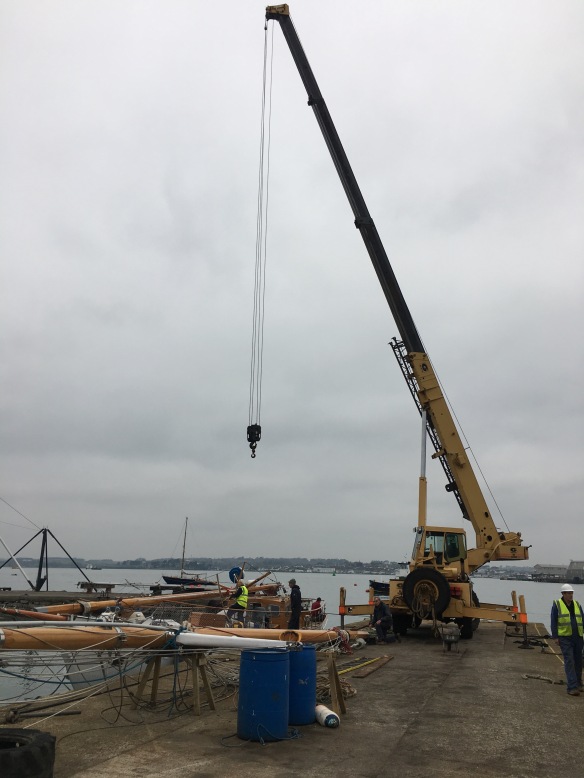 A launch of another boat at Mashfords whilst we were there. 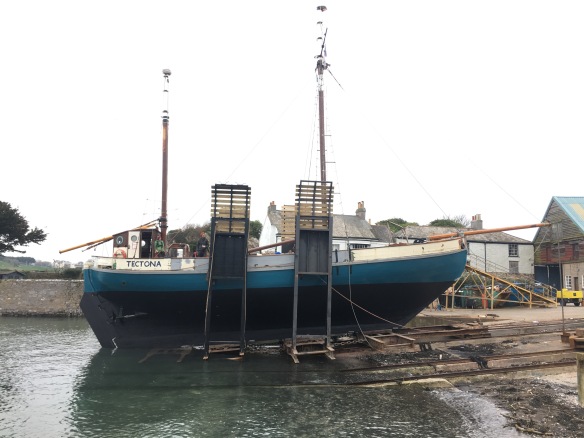 Mess and stuff everywhere as work soldiers on. 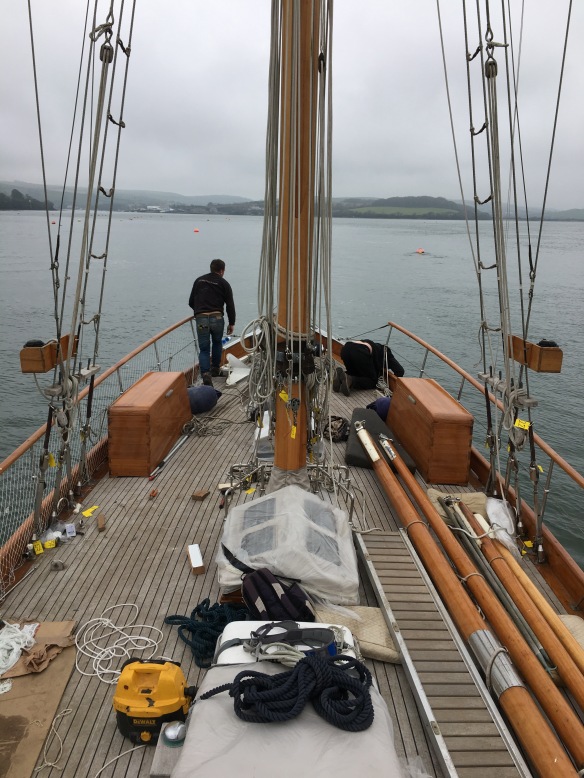 Apparently this was the last flight of the Lynx helicopter flying overhead. 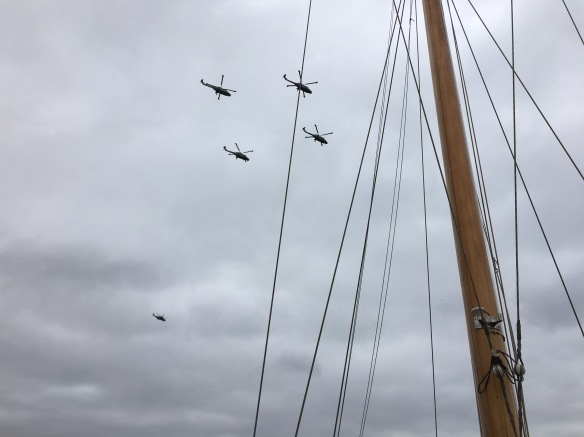 A huge assault landing craft goes by escorted by marines in big ribs. 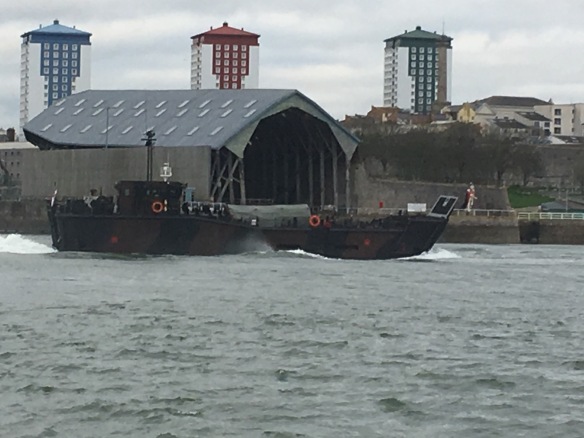 Next morning, she looks very glamorous bathed in dawn sunshine 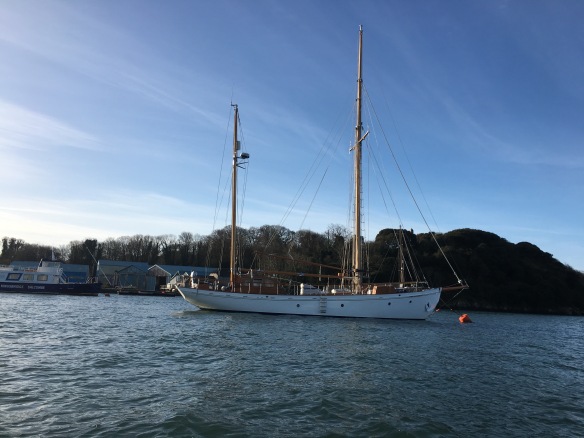 At last, back home in Sutton marina with lots of tidying up to do. A strong breeze on the journey tried all it could do to scratch our new paintwork against lock and pontoon but careful placing of fenders by the Stirling lads averted disaster. 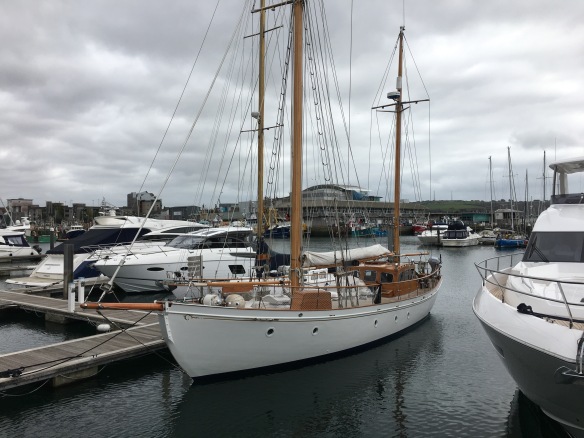