For a while now the heads have been filling more slowly and the fridge and the freezer have not been as cold (They use sea water to cool). The day before yesterday I replaced the forward head water pump with a new spare I was carrying onboard, and for a while it filled a little better. But this morning it just wasn’t filling again. Another Apollo 13 fix issue. There must be an problem with the sea water inlet for the whole boat.

So, this morning on with flippers and mask and down I went to the inlet on the starboard side, about two metres down. A boating equivalent of a space walk. I cleaned it with a stiff brush and we tried the head again. A bit better but still not right.

Next job then, dismantle all the pipework from the inlet to the strainer (filter). Wow, the pipe was absolutely rammed with barnacles and mussels. Totally packed with sea life. Once cleaned out I also cleaned the seacock as well which had a whole mussel farm growing in there.

Now we’re back in business with sea water coming as it should.

Life just isn’t simple on a boat. The picture shows what came out of the pipe. 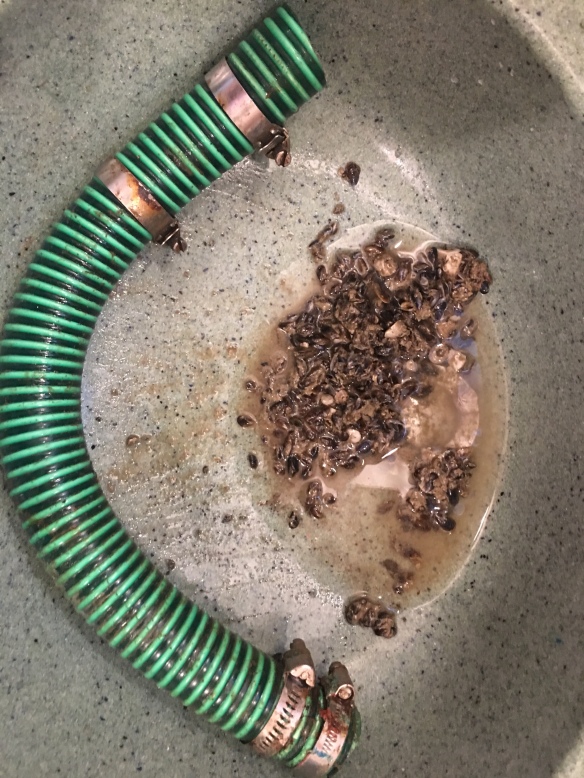 At the beginning of today I knew nothing about Rockford power take offs (PTOs), but now I know how to fix them! A little like Neo in the first Matrix, the power of the net, Youtube and my good friend Bill (kind of the Morpheus of engineering), helped me fix our broken PTO.

We decided to go to a different calmer harbour this morning after a bumpy night, but the windlass that brings up the anchor just would not work. It’s a monster hydraulic system that runs of a huge pump that in turn runs off the PTO at the back of the engine via two industrial sized belts. When the anchor windlass wasn’t winding the chain in, I looked in the engine bay and the PTO wasn’t turning as fast as the engine, which was very odd.

I opened up the inspection hatch on the PTO which had written instructions on it saying it had a clutch and how to adjust it. I then investigated what to do using the internet and Bill guiding me on text from the UK.

Amazingly I fixed it and the anchor comes up like it did in the old days!

If you’ve ever watched the film Apollo 13 or know the story, we’ve been having the same kind of luck this past couple of days. Sailing is a bit like being in space. You’re in a hostile environment, you can communicate with people, but when it goes wrong you have to fix things with whatever you have on the ship. It’s a huge challenge sailing a boat, not the sailing piece, the keeping a complex craft fully operational all the time piece.

20 minutes after fixing the PTO, the anchor broke free again and we were dragging across the harbour and out to sea in 20+ knot gusts! When we pulled up the anchor with our just fixed PTO driving the windlass, the anchor had caught in some fishing net and a huge wooden beam that the windlass had winched to the surface. So I was back in the tender with a knife cutting this free and we’re now safely anchored again, I hope…

Give me strength and just one day to do the flipping varnishing!!! 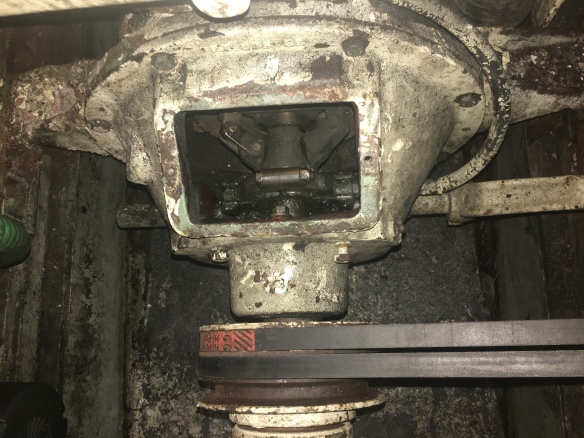 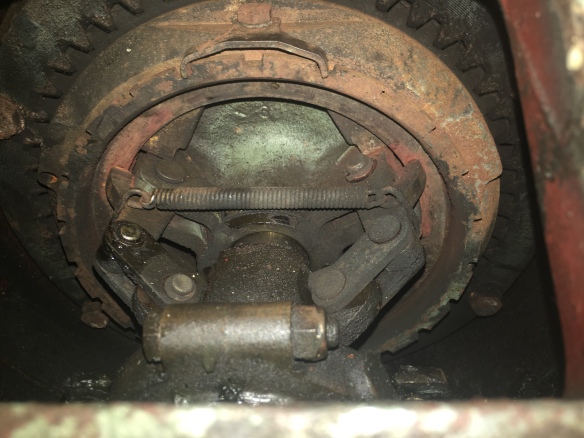 Time to move on to Lefkada on Tuesday from our anchorage in Monganisi in Paxos, so we thought we’d do some boat jobs this afternoon. As we started, the wind got up and the boat to our starboard (right) suddenly dropped her stern lines and pulled up anchor and off she went. We didn’t take much notice until suddenly we were swinging round to starboard, blown by the gusting wind and onto the rocks! He had ripped our anchor out when he brought his up!!!

I started the engine in a hurry to drive us off the rocks but the wind was pushing us round and we were still tied to a tree and a rock. Lotty held Yves on the power and I jumped into the tender to push the bow round to port and our original position. But Yves is too heavy and she wouldn’t budge in the wind.

A helpful South African man came across in his tender and tried to push too, but Yves was resisting, so I jumped on board again, and with my trusty sailing knife, cut the stern lines and we catapulted away into the anchorage trying to miss moored boats in the very tight harbour. What a nightmare and one that was about to get much worse…

We decided to re-anchor and then put the stern lines back on and returned us to where we had been settled for the previous week. Once we’d dropped the anchor and tied on the windward stern line, the wind was up again and the anchor failed with us drifting into the moored boats. We dropped the stern line overboard and desperately tried to avoid a collision, but in doing so, sucked in the line to the propeller. The engine stopped dead as the rope wound round. I can’t type the words that came out of me at that point, because they were really f***ing bad…

I grabbed my knife and my mask and jumped overboard hoping to cut the rope free, but there were too many turns and the rope must have been designed for mooring oil tankers because it’s really thick. So, I quickly climbed back onboard to see us barrelling along in 25 knots of wind towards the anchored boats, who were now pulling up their anchors and scattering. Our anchor was dragging like it had fallen off and Yves heading to the rocky shore next to our favourite restaurant.

Then the guy that started this all told us to throw him a line. The line I felt like throwing him was “You’re a useless f***ing tw*t for ripping our anchor up and causing this whole damned mess”, but beggars can’t be choosers. So we did and we stopped with about 3 feet to spare… Phew.

So then quickly back in the water to free the rope before anything else bad happened. Mask, flippers and knife at hand and in I jumped. But who comes swimming along but the same man who’s boat we are tethered to and reason I’m in the water. At this point I’d gladly have taken help from an aged, one legged deaf and blind man, so there were no recriminations from me. And, to his absolute fantastic credit, he did most of the work to free the rope. I swam down about five times and cut at the rope to his ten times. What an absolute saint.

His diving technique was much better than mine and his ability to stay down for a couple of minutes was totally amazing. I can only think he must be a professional diver but his poor English and our desperation to free the boat stunted any idle chit-chat. In the process I came up badly and have scraped myself up the barnacles that I hadn’t cleared the day before from the hull and I’m cut and scrapped all over.

Once we were free of the rope we decided to head out of Monganisi and it’s poor anchor holding and go to Gaios South anchorage. The anchorage is more exposed, it’s breezy and bumpy, but we’re safe in the gusting winds.

I went back to Monganisi in the tender to recover the stern lines and also to give our best bottles of wine and heartfelt thanks to the two boats that helped us so much.

But just to top the day off, when I came back the dinghy bumped the boarding ladder which is now in 27 metres of water along with the grappling hook I tried to recover it with. Bum.

Lotty has been a brick, following my desperate instructions to save us and the boat from harm. I think we’re both a bit traumatised tonight. She had a large glass of Amaretto and is now sleeping. I’m sipping lots of beer.

Anyway, the wonders of the interweb, Babis from the Gaios Dive Centre says “Tomorrow at 9 I am coming to your boat”. Hopefully he can find the ladders and grappling hook. All this agreed at after 10pm tonight following a Google search. What a wonderfully modern world we live in… 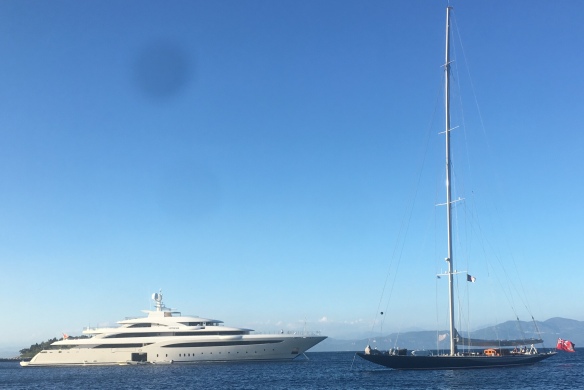 Two super yachts next to us in Gaios

After a Nanna-filled week in Gouvia in Corfu we were stuck for a week, weather-bound there. Then the weather turned and we were off to Paxos.

We anchored in Gaios the first morning when we arrived at 3:30am. Up the next morning and we went to Mongonisi again and anchored stern-to against the rocks with two long lines out. We’ve swum off the boat, investigated the island again, seen dolphins up close from the tender and gatecrashed a local hotel to use their pool for free. The weather has been hot and we’ve had a lovely time. 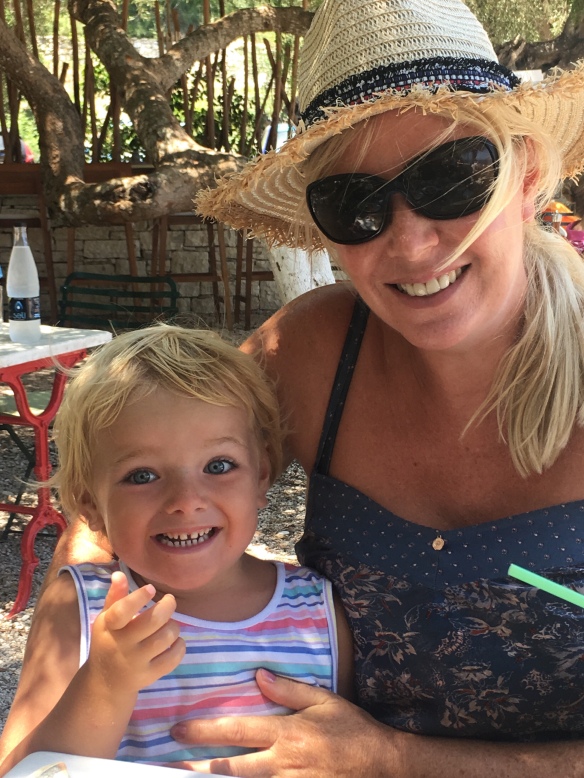 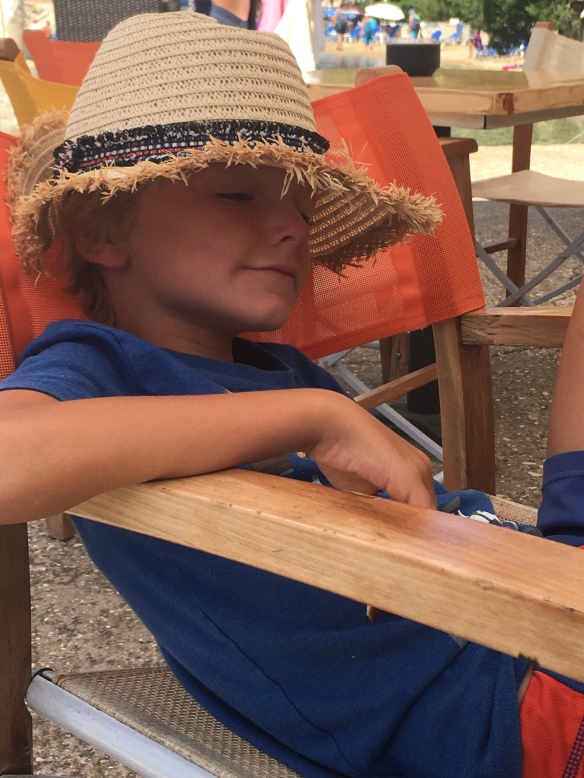 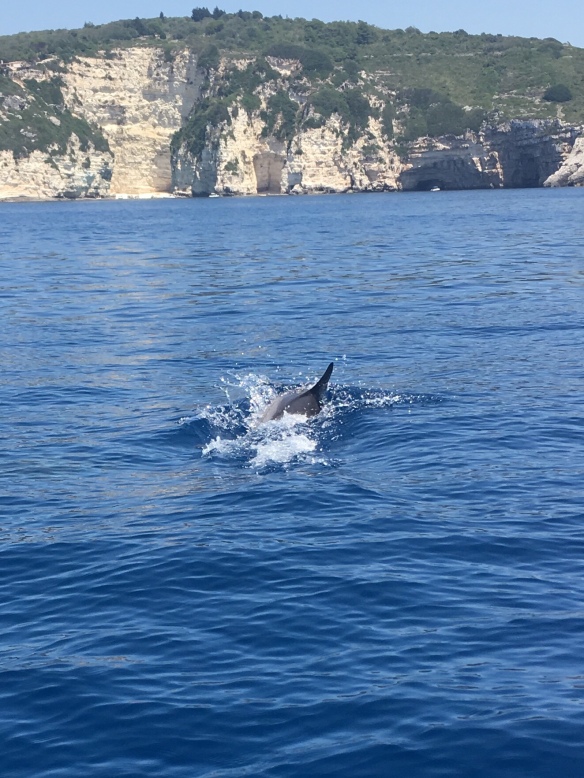