We, Lotty and Sacha live in Alnwick with our two children Hector (5) and Phoebe-Plum (2) and we will be joined by Sacha’s two sons Sam (16) and Jack (14) who live in Chester-le-Street.

We love the Mediterranean and especially Greece. It’s a dream come true to be able to sail there, nevertheless quite a daunting but exciting adventure that has taken a huge amount of planning and work. 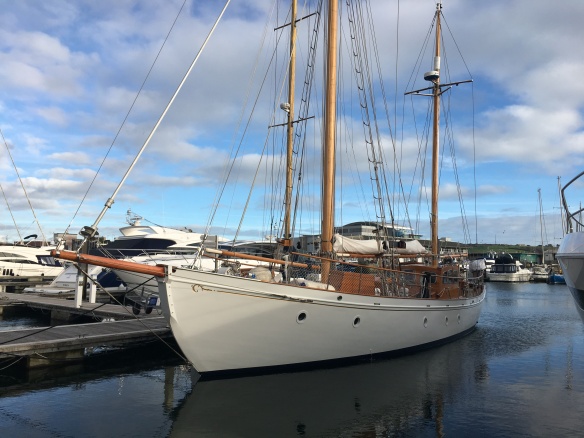 Yves Christian, a gaff ketch, was designed by Scottish naval architect WG McBryde and built in France for a French owner in 1952 – purportedly for President de Gaulle’s finance minister and named after the owner’s two sons, Yves and Christian – there are still gun racks to be found under the table for personal protection! She was commissioned for making long passages and Mediterranean cruising, but much more recently she has been based in Devon in the West Country as a family boat, and that is where we found her at the end of 2016.

62 feet long including her bowsprit and 14 feet wide, she is an immensely strong ocean going yacht made of oak beams with iroko planking. At well over 40 tonnes she has a huge displacement that makes her sure-footed in heavy weather. She will accommodate up to nine people, but six in comfort.

Yves went through a massive refit / rebuild between 2000 and 2003 with no detail spared – it was the objective of her previous owner to own a boat which was as good, if not better, than when she was first launched. Between January and March 2017 she went through a further refit at Stirling and Son Ltd at No1 Covered Slipway in Plymouth. This yard is housed in a building designated as an ancient monument. It was built in 1763 and ships for the Royal Navy, including one of Lord Nelson’s flagships, were constructed and launched there.

Yves will be our home for the coming months.